The Basic Local Alignment Search Tool (BLAST) is an algorithm and program for comparing primary biological sequence information, such as the amino-acid sequences of proteins or the nucleotides of DNA and/or RNA sequences. BLAST is one of the most widely used tools in bioinformatics; it can be applied to different problems or projects in a myriad ways.

There are two main steps in BLAST: 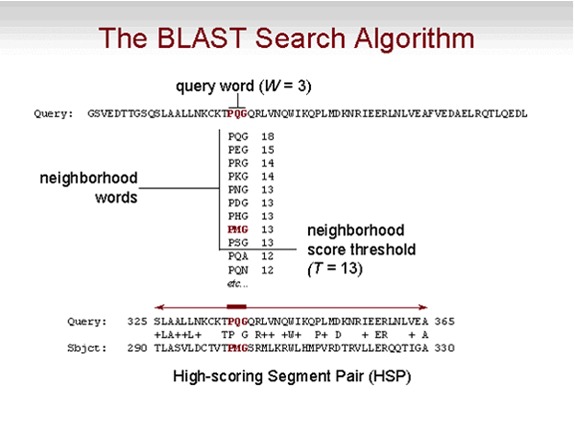 The command line version of BLAST

The command line version of BLAST can be downloaded via conda using the following command:

This program is included in the bioinfo-notebook conda environment.

There are five main types of BLAST search:

To search against a set of nucleotide or amino acid sequences using BLAST, a database must be created. This can be done using the makeblastdb command.

In this video, the FASTA amino acid sequences of Swiss-Prot are downloaded, and a BLAST protein database is created from these sequences using makeblastdb. UniProtKB/Swiss-Prot is a manually annotated, non-redundant protein sequence database. As it is well-annotated and curated, the Swiss-Prot database gives informative results when searched locally using blastp and blastx. The link used in the wget command is copied and pasted from the UniProt downloads page. The compressed FASTA sequences of the Swiss-Prot database on ftp.uniprot.org.

These FASTA amino acid sequences are compressed into a .gz (gzip) file. Before using the makeblastdb command, this FASTA file is uncompressed using gunzip, turning uniprot_sprot.fasta.gz into uniprot_sprot.fasta. Once the FASTA file is downloaded and uncompressed, makeblastdb is used to create a BLAST protein database of the amino acid sequences in this FASTA file. This BLAST protein database is named swissprot, and consists of three binary files.

Once the BLAST protein database is created, blastp and blastx can be used to search sequences against it. This database can be selected using the argument -db swissprotwith blastp or blastx (the path to the swissprot database will need to be given if the command is run from a different directory).

The program blastn is used for searching nucleotide databases with a nucleotide query.

The last two arguments given in this command- -evalue and -max_hsps- are optional, but they are useful as they allow the results to be filtered before being written to the file. Using these arguments will result in more specific results, and will reduce the need to manually filter results later.

These BLAST results are taken from the video demonstration and are in BLAST output format 6.

These results are tab-separated values, meaning each column in the results is separated by a Tab character. These columns always appear in the same order:

In this demonstration, makeblastdb is used to create a BLAST database from the file S_cere_genomes.fna. This FASTA nucleic acids (.fna) file was created by concatenating the following Saccharomyces cerevisiae genome assemblies, which were downloaded from NCBI: GCA_003086655.1, GCA_003709285.1 and GCA_004328465.1.

The program blastn is then used to query 23S_rRNA_gene.fna against this database. This file is a copy of the Scutellospora fulgida isolate NC303A 25S ribosomal RNA gene from NCBI.

The program tblastn is also used to query YPK1.faa against this database multiple times. This FASTA amino acid (.faa) file is a copy of the serine/threonine-protein kinase YPK1 from UniProt. This search is carried out multiple times with additional parameters: the flag -evalueis used to set an E-value threshold, and the flag -max_hsps is used to set a maximum number of High-scoring Segment Pairs (HSPs).

The results from these BLAST searches are written to tab-separated values (.tsv) files. This output format is specified with the flag -outfmt 6.